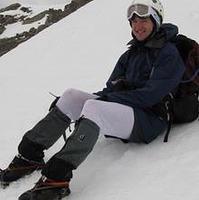 Hello. I live in Wellington, generally hang around and help out at the Wellington Tramping & Mountaineering Club (http://www.wtmc.org.nz/), and my preferred stomping grounds are the Tararuas and Ruahines (mostly weekenders), but every so often I look further afield. I've been finding places to go for daywalks for as long as I can remember, but have only been tramping as habit since about 2006 after I decided that I very much want tramping and the outdoors to be a normal part of my life, and not just a treat or something I do very occasionally for fun. I've been trying to keep records of what I'm doing on my blog thingee (http://www.windy.gen.nz/). I lived in Melbourne between the start of 2011 and August 2013, as an indirect consequence of low science funding in New Zealand. I've now returned, but thanks to a couple of recent additions to the family have found another distraction from the hills, at least from a short time.