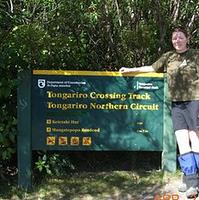 Having long held a love of the outdoors, I am so grateful to the WTMC (my new home club) for enabling me to get out a lot more often than I used to (although still never enough!) After completing Outward Bound in February 2007 and my Gold DoE in October 2007, I have managed to continue getting out there on a regular basis. Often its nowhere further afeild from home than the Tararuas, but in the last 12 months (to April 2009), I have also managed the Kepler track and tramps in the Ruahines and Taranaki. Coming up soon are more Tararuas and Ruahines, as well as the Orongorongos, where I havent been since I was a teenager! My aim at the moment is to get to a different Great Walk each year. Last year Kepler, already done Abel Tasman... Where to this year? I think maybe the Tongariro Northern Circuit perhaps?